The Founder’s Memorial Reports on Successful First Year of Operations 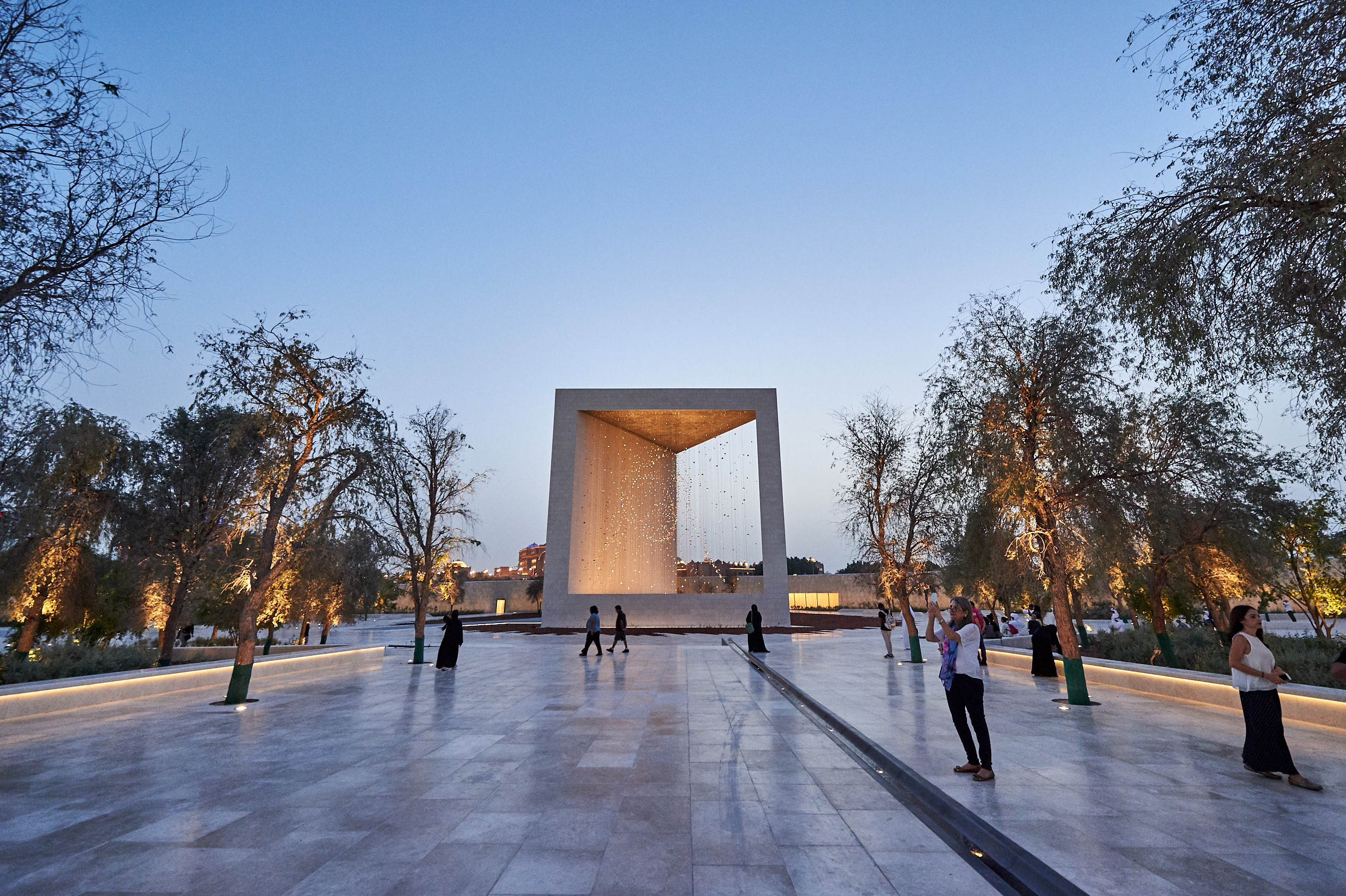 Memorial has attracted almost 200,000 local and international visitors in its first year

The Founder’s Memorial, a permanent national tribute to the late Sheikh Zayed bin Sultan Al Nahyan, the founding father of the UAE, has completed its first year of operations since opening to the public in April 2018.  In that time, 198,919 people from a range of ages and cultural background have visited the Memorial, including a number of state visitors and international delegations.  The 3.3-hectare Memorial site has also been widely utilized as a peaceful new public space in the UAE capital and a vibrant focal point during national celebrations and events.

The Founder’s Memorial was established as a place where local and international visitors can learn about and reflect on the life, legacy and values of the late Sheikh Zayed through a series of personal encounters that reveal aspects of him as both a man and a leader.  Its centerpiece is The Constellation, a monumental public artwork featuring a 30m-high, three-dimensional portrait of the late Sheikh Zayed that can be viewed from various angles at the Memorial and from other vantage points in the city.  The thoughtfully landscaped Memorial site also contains a Heritage Garden with a  collection of native plants and trees, an inspired Falaj-Water Channel feature, Welcome Center offering moving multimedia experiences, and an elevated walkway featuring a series of inspirational quotes from the late Sheikh Zayed.

His Excellency Dr Yousef Al Obaidli, Director-General of The Founder’s Memorial, stated that the monument reflects the beloved and respected status that the late founding father continues to hold in the hearts of the UAE people and countless others around the world:

“The Memorial honors and disseminates the long-standing legacy of a man who epitomized insightfulness and wisdom in leadership and sound governance.  A man whose glorious shining bright achievements continue lighting the UAE's path towards progress and prosperity,” said Dr Al Obaidli.

He added, “In a short span of time, The Founder’s Memorial has become one of the key cultural and tourism landmarks in the UAE capital. In its first year, the Memorial has hosted delegations from 3,277 educational institutions and 2,180 government departments, 556 guests from the private sector and hotels, and 217 visitors from embassies accredited in the UAE.”

“Every possible effort is being tirelessly made to achieve the Memorial’s mission and advance the cultural renaissance in the UAE, through the landmark’s unique amalgamation of modernist art experiences and quintessential Emirati heritage,” said Dr Al Obaidli.

Open daily, The Founder’s Memorial offers year-round programming and free guided tours to visitors.  Since opening one year ago, around 1,472 cultural tours have been provided by the Memorial’s trained  Cultural Tour Guides, and more than 10,000 visitors from a diverse range of cultural backgrounds have embarked on one of the Memorial’s sightseeing tours.

Ameena Al Hammadi, Head of Cultural Tours at The Founder’s Memorial, said that each visit to the Memorial provides visitors with new insights into the life of the late Sheikh Zayed and the history of the nation, as well as being an opportunity to reflect on the aesthetic, architectural and artistic aspects of the monument:

“Emirati tour guides offer free 30-minute tours to the public in both English and Arabic that provide a general overview of the country’s history, and help visitors gain a deeper understanding of Sheikh Zayed and his legacy.  Tours begin at The Welcome Center, where guests are introduced to various interactive experiences before visiting other sections of the Memorial, including The Constellation, the elevated walkway and the Heritage Garden,” said Al Hammadi.

"The Memorial team is professionally trained and committed to providing the best possible levels of services and hospitality, in order to ensure an enjoyable and informative experience for all visitors,” she added.

The opening of The Founder’s Memorial was a prominent highlight of the Year of Zayed in 2018, a national year of remembrance declared by His Highness Sheikh Khalifa bin Zayed Al Nahyan, President of the UAE and Ruler of Abu Dhabi, to mark 100 years since the birth of the late Sheikh Zayed.  Prior to its public opening, the Memorial was inaugurated in a major event attended by His Highness Sheikh Mohammed bin Rashid Al Maktoum, UAE Vice President, Prime Minister and Ruler of Dubai, and His Highness Sheikh Mohamed bin Zayed Al Nahyan, Crown Prince of Abu Dhabi and Deputy Supreme Commander of the UAE Armed Forces, and an array of senior dignitaries from across the UAE.

His Highness Sheikh Mohamed bin Zayed Al Nahyan, Crown Prince of Abu Dhabi and Deputy Supreme Commander of the UAE Armed Forces, returned to The Founder’s Memorial in January 2019 to launch the National Expert Program, a new initiative which aims to mentor and support 20 “experts-in-the-making” across 20 sectors critical to the development of a knowledge-based economy.  On that occasion, His Highness toured the Memorial and generously thanked its employees for their work sharing Sheikh Zayed’s inspirational vision and humanitarian principles with visitors from around the world.

Echoing Sheikh Zayed’s lifelong commitment to tolerance and diversity, The Founder’s Memorial was then chosen as the site for the historic Global Conference of Human Fraternity in February 2019, held in conjunction with the visit of Pope Francis and convened in the presence of His Highness Sheikh Mohammed bin Rashid Al Maktoum, Vice President, Prime Minister and Ruler of Dubai, and His Highness Sheikh Mohamed bin Zayed Al Nahyan, Crown Prince of Abu Dhabi and Deputy Supreme Commander of the UAE Armed Forces, along with many Sheikhs, ministers and other senior officials. During the event, Pope Francis and the Grand Imam of Al Azhar, Dr Ahmed Al Tayyeb, signed the Human Fraternity Declaration in the presence of more than 400 cultural, religious and intellectual figures from across the globe.

Similarly, The Founder’s Memorial has participated in a range of local and international events that are consistent with the vision and values of the late Sheikh Zayed, including Earth Hour, Commemoration Day, Flag Day, 47th UAE National Day, and the International Day of Tolerance.  This year, The Founder’s Memorial is actively supporting the UAE’s national Year of Tolerance in 2019, declared by His Highness Sheikh Khalifa bin Zayed Al Nahyan, President of the UAE and Ruler of Abu Dhabi, to reinforce the country’s status as a global capital for tolerance and a bridge for communication between cultures that rejects extremism in all of its forms.

In March 2019, The Founder’s Memorial also served as the site for the official lighting of the Special Olympics World Games torch, in a high-profile ceremony organized by the Abu Dhabi National Oil Company [ADNOC] and attended by thousands of athletes, volunteers and supporters.

In addition to its permanent attractions, The Founder’s Memorial has also played host to a number of temporary exhibitions in the last year.  The first of these, “Sheikh Zayed: A Century of Memories,” was organized by Lest We Forget, a community-based initiative supported by the Salama bint Hamdan Al Nahyan Foundation, and featured a collection of personal stories and artefacts related to the late Sheikh Zayed that were provided by members of the UAE community.  The second temporary exhibition, organized by the EU delegation to the UAE, and entitled “Sheikh Zayed and Europe: A Journey,” honored the life of the late Sheikh Zayed, documented his diplomatic relationships with a number of European leaders, and celebrated the longstanding ties between the UAE and Europe.

Feedback and Information for Visitors

The Founder’s Memorial is located at the corner of Corniche Road and 18th Street along the Abu Dhabi Corniche.  The Welcome Centre is open daily from 9am to 10pm.  Free public parking is available.  Information on programming, guided tours and group visits can be found at the Memorial’s website [www.thefoundersmemorial.ae] or by calling 02-4100100.  Latest updates from The Founder’s Memorial can also be accessed via Instagram [@FounderMemorial] and Facebook.  The Founder’s Memorial is an entity of the Ministry of Presidential Affairs.